Within moments of meeting Ghada AbuKuwaik, owner of Curemed Pharmacy, you know you’re talking to someone who is passionate about taking care of her community. 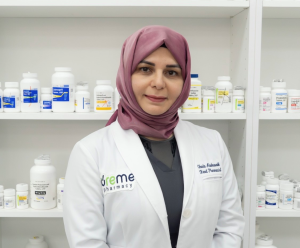 “There’s kind of a fire inside me, I love to help people,” said Ghada. “Our staff goes above and beyond because we just really want to help.”

This becomes evident when you learn more about Ghada’s backstory. Not long after earning her RPh degree in 1997, Ghada and her husband moved from Dubai to New York. Ghada worked at several independent pharmacies over the years and while she enjoyed her work, she wanted to do more. Influenced by her father’s experience of operating his own clinic and pharmacy, Ghada felt she possessed the same management and leadership skills to run her own pharmacy.

She now operates two pharmacies, serves on the boards of NIAB and NCPA, and is the facilitator for the NJCPESN chapter which includes about 75 pharmacies.

The Early Years of Ownership

In 2014, she offered help to a struggling pharmacy in Clifton, NJ. One year later, she was given the opportunity to purchase the store. Ghada and her small three-person staff immediately began offering more services at Curemed Pharmacy like medication therapy management (MTM), compliance packaging, compounding, and specialty medications.

It wasn’t easy at first. Ghada says it took two years just to break even, partly due to intense competition in the area.

“I was a fighter,” said Ghada. “I felt, ‘this has to happen.’ I had to put myself out there and build trust.” 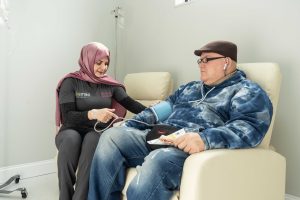 During those first two years, Ghada visited adult care centers to give lectures on diabetes and blood pressure. On days when Ghada wasn’t giving a lecture, she introduced herself to doctor’s offices and clinics in her community. Ghada also visited schools, churches, and participated in health fairs to help connect with the community. She also made house calls to help hepatitis patients with their medications.

“Doctors were starting to see I was treating their patients like they’re my family,” said Ghada.

Curemed Pharmacy also offered diabetic education for five years but ultimately had to stop. She and her staff weren’t getting paid due to the combination of Medicare Part B and PBMs denying reimbursement.

“I still have the knowledge to help people in that way but not getting compensated made it really hard for me and my employees to continue on that path,” said Ghada.

Over the past seven years, Curemed Pharmacy has developed a reputation for being the go-to pharmacy for whatever specialty medication is needed.

Ghada recalls a case where a mother brought in her child suffering from chronic eczema. After a month of being treated by Curemed Pharmacy, the child’s eczema cleared up. In another case, a 14-year old had been prescribed a controlled substance for a hormonal issue. Ghada effectively treated the teen with a safer compounding alternative. 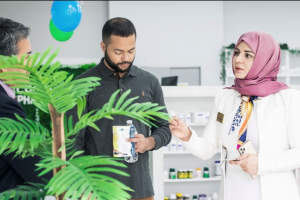 Ghada has a passion for serving the people of Clifton and Paterson, NJ and beyond.

“Whenever doctors have a really hard situation, they call me to help with medications,” said Ghada.

Curemed Pharmacy’s stellar reputation extends well beyond her immediate community. Colleagues from across New Jersey regularly reach out to Ghada for advice on best practices on things like compliance packaging and compounding accreditation. Ghada says she’s always ready to help others thrive and improve the overall health of independent pharmacy.

And before long, they might want her advice on something else (see below).

While most states allow pharmacies to administer long-acting injectable (LAI) antipsychotic medications, it is still considered a rare service. This is especially true in a handful of states where pharmacists are not authorized to administer these medications. Being required to employ nurses to administer the drugs understandably makes offering this service less appealing. New Jersey just happens to be one of those states.

And Ghada just happens to be a pharmacist who doesn’t let that stop her.

Recognizing that only a few pharmacies in New Jersey were offering LAI antipsychotic medications, Ghada viewed this as another opportunity to help and fulfil a need. Additionally, Ghada is passionate about patients not having to wait to see a doctor, especially when gaining access to life-altering medications is so crucial. 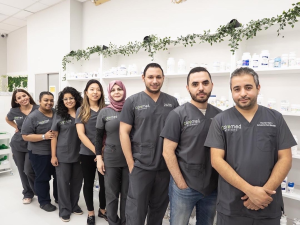 Ghada and her staff have a system in place to make it easy for patients. Pharmacy technicians handle the scheduling, pharmacists are educated on the drugs and provide consultation, and a nurse administers the medication, which can take 15 minutes to an hour depending on the drug.

Ghada currently has one nurse on staff but hopes to hire more.

“With time, I’m hoping to reach more doctors to let them know injectables are available at my pharmacy,” said Ghada. “The challenge is being able to get the word out.”

Ghada has also informed area doctors her staff nurse is able to administer injectable medications beyond LAIs. The demand for Covid testing and vaccinations has prepared Curemed Pharmacy for seamlessly adding new clinical services into its workflow.

A Covid Testing and Treatment Trailblazer Curemed Pharmacy is a leading provider in New Jersey for injectable medications and Covid treatments.

When the need for testing and treatment was highest, Ghada and her team delivered. Curemed was one of the first pharmacies in New Jersey to provide Covid testing. Also, after partnering with the CDC and eTrueNorth for Covid testing services, Curemed vaulted to a second place ranking in the state as a provider for these critical services.

More recently, Curemed became the only pharmacy in the immediate area to provide monoclonal treatment for Covid in both a pharmacy and home setting. Curemed proactively provides test-to-treat Paxlovid and other injectable monoclonals.

And now Ghada is able to offer more services to more people. On November 1, she and her staff held a successful grand opening event for Curemed Pharmacy’s second location in nearby Paterson, about 15 minutes away. A city councilman was in attendance and was excited to speak with Ghada about her pharmacy’s involvement in future community events. 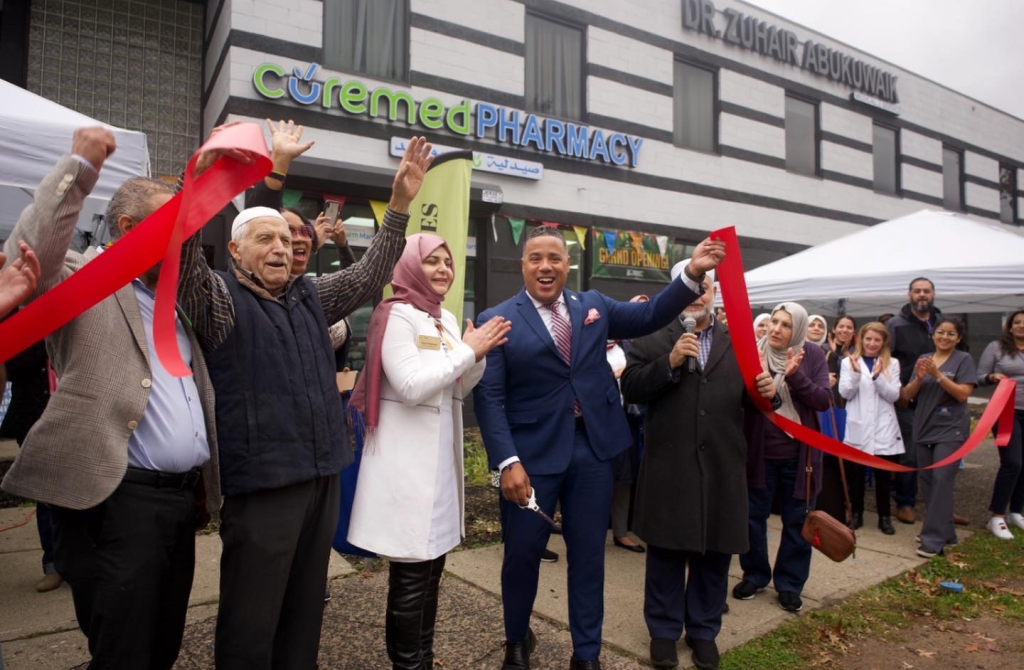 Let the celebration begin! An official ribbon-cutting ceremony was held on November 1, 2022, for Curemed Pharmacy’s new store in Paterson, NJ.

“It was fabulous and so productive,” said Ghada. “Many people from the surrounding area came along with our friends and families.”

Not everyone in Paterson might realize it yet, but they’re fortunate to have someone like Ghada in their neighborhood.